After the millennium development goals (MDGs), established by the United Nations in 2001, in 2015 the UN came up with the 17 sustainable development goals (SDGs). These are a universal set of goals and objectives to be used and included in every member of the UN agenda until 2030. The SGDs cover a wide range of final ends of sustainable development. From the end of poverty and hunger to the promotion of inclusive and sustained economic growth or even achieving gender equality.

The SGD 4 on “Quality Education” specifically addresses Education for Sustainable Development (ESD) and its related approaches.  In this view UNESCO has been putting into practice several Workshops to train young people, from all over the world, in ESD and on how to apply it to their communities, promoting lifelong learning opportunities for all.

By bringing together active youth from all around the world and providing them information and tools, the impacts and outcomes from the various workshops have shown results in a community level.

A UNESCO / WWF two-day Workshop held in Nairobi, in February 2017 reunited 44 ESD Youth Leaders from 14 different African countries. After this some of the participants have conducted further training with other youth, have joined efforts to put forest management into practice alongside with youngsters and scouts and also started their own projects. Monique Ntumngia is an example of this, having trained 200 girls in Cameroon on SDGs. Her active training on the application of renewable energies has made it possible for 3000 families to have available cooking gas.

On the Middle East after a training program in Beirut, that brought together 39 youth, 31 of them implemented their own workshops reaching out more than 900 others from 19 different countries. According to Ghada Zribi, an ESD Youth Leader from Tunisia, this training “has been the starting point for a partnership.”, reinforcing the need to establish partnerships and a platform to exchange experiences in a local context in Tunisia. Bearing this in mind she organized several workshops where the intent was sharing SDGs with the community, especially in schools.

Following an Asia-Pacific Regional Workshop for Youth Leadership Training on ESD in Bangkok, several of the participants have, as in other regions, organized workshops in their communities, reaching more than 1300 youth. As the participant, Pragya Mishra stated having taken part in this training enabled her to run a workshop in India, “learning not only on how to work alone but how to bring people together”. In addition, other participants have used selected topics to incorporate into their own activities and are working on establishing a ‘mentors network’.

In Europe, after a 2-day GAP Training in Dublin, 33 workshops reached more than 1000 youngsters, especially in Belgium and Ireland. The outcomes were well defined and included forming a group to pursue the conservation of the local biodiversity and addressing some SDGs with groups of young people.

Also in Europe, a Workshop took place last March in Portugal with over 40 participants from 24 different countries. This was the result of a synergy of UNESCO and Foundation for Environmental Education (FEE), joining UNESCO’s GAP and FEE’s YRE program. After this 3-day workshop in Portugal, there has been constant communication between the participants through different platforms including Slack. According to Kristijan Angeleski, a participant from Macedonia, “When you work with people from different countries you can see how all the issues connect and relate.”, and that drove him to organize workshops locally where youngsters were encouraged to identify local issues and relate them to the SDGs. Then they wrote reports that were presented to the national UN office in Macedonia. Nevertheless, some participants have also been put in contact with the YRE National Operator in their respective countries.

Capacity building for ESD Youth Leaders in Latin America was organized along with the Earth Charter and Planeta Océano, through a series of workshops. After these, an ESD training took place in Brazil joining 37 youth from 14 countries of Latin America. 27 participants, as in other regions, developed workshops after the training, giving the tools learned to other people, reaching 999 youth.

Recently, the UNESCO ESD Youth Conference “Youth Saves the Planet” selected some of the youngsters that participated in the regional training, and others due to their dedication to education for sustainable development and reunited them in Paris on May 14th – 16th.

Among many issues and capacity building sessions the main focal points of discussion were: partnerships and networking between ESD Youth Leaders and providing input on a draft position paper focusing on the development of ESD in the future.

During the two-day conference, there was a constant share of knowledge and experience from different background perspectives, cultures and ways of thinking, which reinforced the need for a network platform where the participants can be connected at all times. Even though there was no final agreement on how this platform is going to work, there was no doubt that there is an urging need to put it into practice.

These different people with distinct ideas and projects all relate through the SDGs. From the 17 their areas of work are diverse and there is a notorious pattern and tendency for the same SDGs in each region. However, Quality Education (4) is a common priority to all regions, which can be related to the fact that every ESD Youth Leader uses education to connect to the local people and share their own projects. In addition to this, they understand the importance of the transmission of relevant content, shared through learner-centered teaching, in a healthy environment with adequate and equitable resources, where the outcomes encompass attitudes, knowledge, critical thinking and values. 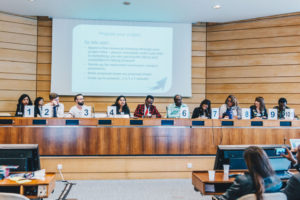