The Natura 2000(1) network represents a group of areas that have a particular ecological interest. Its goal is to ensure the conservation of a wide range of rare, threatened or endemic both animal and vegetal species in more than 200 types of habitats, as foreseen in the 92/43/EEC Directive of 21st May 1992 (The Habitat Directive(2)), and also ensure the survival of the mosvaluable European species through the 2009/147/EEC Directive of 30th November 2009 (The Bird Directive(3)).

During this article, two areas with special interest to the envolved schools are presented: Gándaras de Budiño, located in Porriño, Pontevedra, Spain, and the future Local Protected Landscape of Pateiras do Ave, located in Vila Nova de Famalicão, district of Braga, Portugal. Using bibliographic research and interviews with the responsables for both areas, it is intended to explain the importance of both biodiversity preservation taking into account their characteristics, and their development rate, as well as their framework in Natura 2000. 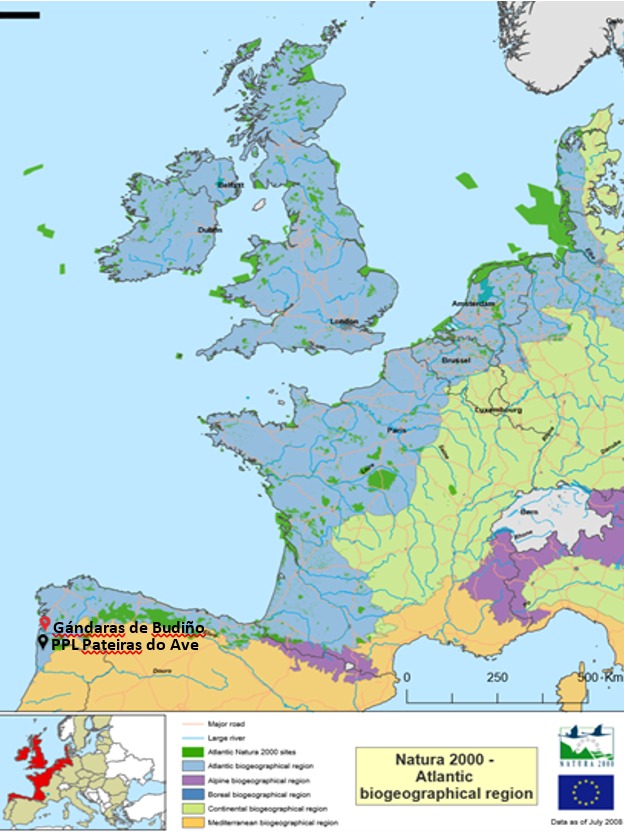 The future Local Protected Landscape of “Pateiras do Ave” is located in the Northwest of Portugal, between two wildlife corridors: the Ave river and a set of small elevations, that are parallel to the coast from Esposende to the Douro river. Its landscape is a “(…) mosaic of palustrine wetlands in old alluvial terraces, forests essentially composed by pine trees and eucalyptus and agricultural fields”, as explained by Vasco Flores Cruz, the ecologist responsible for this project. He adds that “[…] in this region agriculture is the main economic activity, what allowed that this area kept the harmonious development, with the conservation of many of its natural values”.

Gándaras de Budiño is a swamp ecosystem, formed 20 million years ago in the main geological fault that goes through Galicia. This area devolved as a result of the seasonal floods of the Louro river and it is composed by swaps, seasonal lakes and flooded pastures.  This river, which is one of the tributaries of the Minho river, forms huge river terraces thar originate a number of freshwater lakes, whose mud is an excellent subtract to a wide range of Galician endemic plants, typical plants of the Atlantic climate (4,5). In this area, it was possible to find fourteen protected habitats, some of them priority habitats. This was the reason why it was included in Natura 2000, in March 2014, throughout the category of SAC (Special Area of Conservation), according to the Habitat Directive(6). 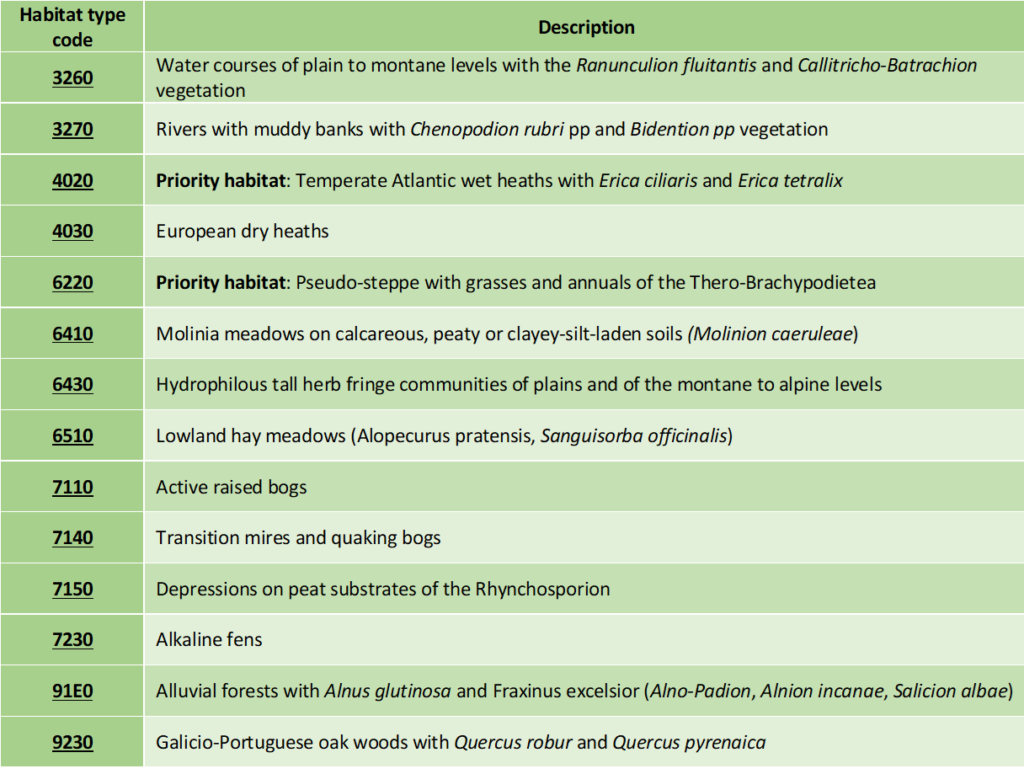 Threatened habitats found in “Gándaras de Budiño”, according to the European Law.(7)

Associated with these Habitats, 39 species that appear in the Annex II of the Habitat Directive(2)  and in the Annex IV of the Bird Directive(3) were identified in this area.

Vasco Flores Cruz (personal communication, 13th March 2020) refers that in Pateiras do Ave, of the total amount of identified habitats, seven are also in the Annex II of the Habitat Directive and two of them are considered priority habitats. 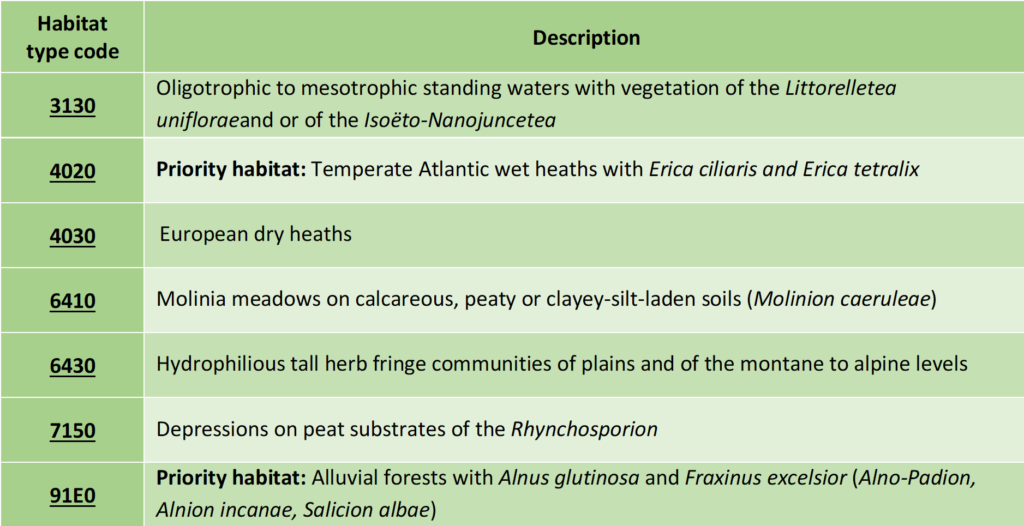 Threatened habitats found in “Pateiras do Ave”, according to the European Law.(2)

The ecologist adds that “there were identified about 185 vertebrate species” and that the “invertebrate and the flora (that already counts with 234 species) inventory is still occurring”. A large number of this species are also under the protection of the Bird and Habitat Directives. 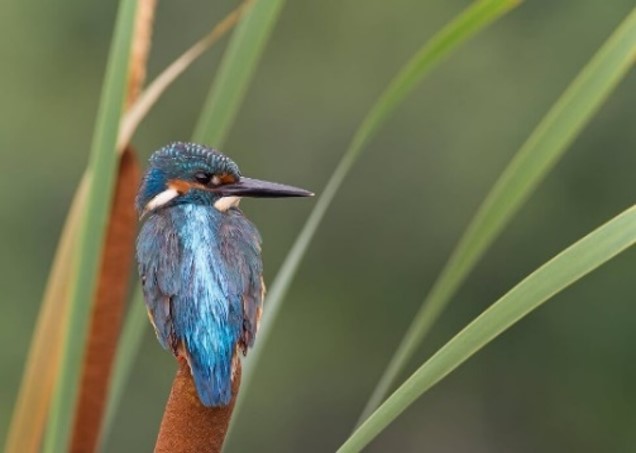 Comparing the data, there is a large number of common characteristics between Gándaras de Budiño and the future LPL of Pateiras do Ave. Recurring to the eBird platform, it was possible to compare the biodiversity of the birdlife identified in both areas (9,10,11,12,13). Of a total of 146 species, the majority of them (about 60%) is common. These data are explained by the fact that both areas are at the same migratory route – the East Atlantic flyway (14). This percentage could be more expressive, if the sampling effort in the sighting hotspots was greater.

The fact of common habitats and species in both areas is explained by being a part of the same biogeographic region- the Atlantic Region (15). This is one of the most exploited zones and the one with the biggest population density of Europe. The long history of human settlement had a huge influence in the evolution of the rural landscape. A long time ago, one considerable portion of the land was transformed and used to extensive agricultural activities, in a small scale, though, that helped creating interesting seminatural habitats, in the biodiversity point of view, such as marches, heaths and meadows, whose diversity of species is owned to a long tradition of extensive management (16). 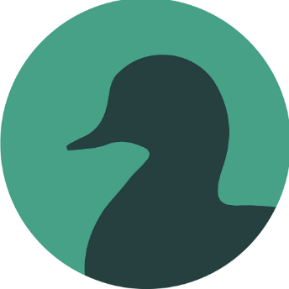 The human activity, though, has become more invasive. Gándaras de Budiño is located in one industrial area associated to granite quarries, where the globally known ornamental stone named “granito rosa Porriño” is extreacted from. This activity enhances the residues’ deposition in the lagoons, what contributes to changes in the habitats and consequent biodiversity loss. In the future LPL of Pateiras do Ave, it is too early to achieve solid conclusions about biodiversity loss or recovery. However, there are some empirical data that allows Vasco Flores Cruz to say that there is one considerable loss of biodiversity, when compared to some decades ago. The use of old cartography allows Vasco Flores Cruz to say that “[…] nowadays, agriculture and silviculture are developed under a very intense regime, what causes a  strong pressure in the natural habitats, with a huge impact I biodiversity that hold mainly birds associated to agricultural and aquatic habitats. That’s the reason why it is so urgent to rotect this area, inserting it in Natura 2000”.

By the geographic localization and by the common characteristics to both locations, it is possible to conclude about the importance of both areas in biodiversity preservation, specially for the species associated to the threatened priority habitats. The classification of Gandaras de Budiño allows to predict the success of the future classification of Pateiras do Ave (18) in the biggest network of coordinated Protected Areas – the Natura 2000.