Did you ever think where all the trash that you throw goes? Every year, thousands of trash are thrown into the seas. But why should we care about that? Why is it important? In fact, seas make oxygen that is important for us to continue our lives. Most of the oxygen we take into our bodies come from the seas. Many jobs are related to the seas, we can feed ourselves from the creatures in the sea, and most importantly, the seas regulate the Earth's climate. But sadly, because of the things we caused there is sea pollution. So, what is sea pollution? Sea pollution is dirt, trash, and chemicals that are in the sea. It harms the creatures living in the ocean and us. Is it possible to prevent sea pollution? 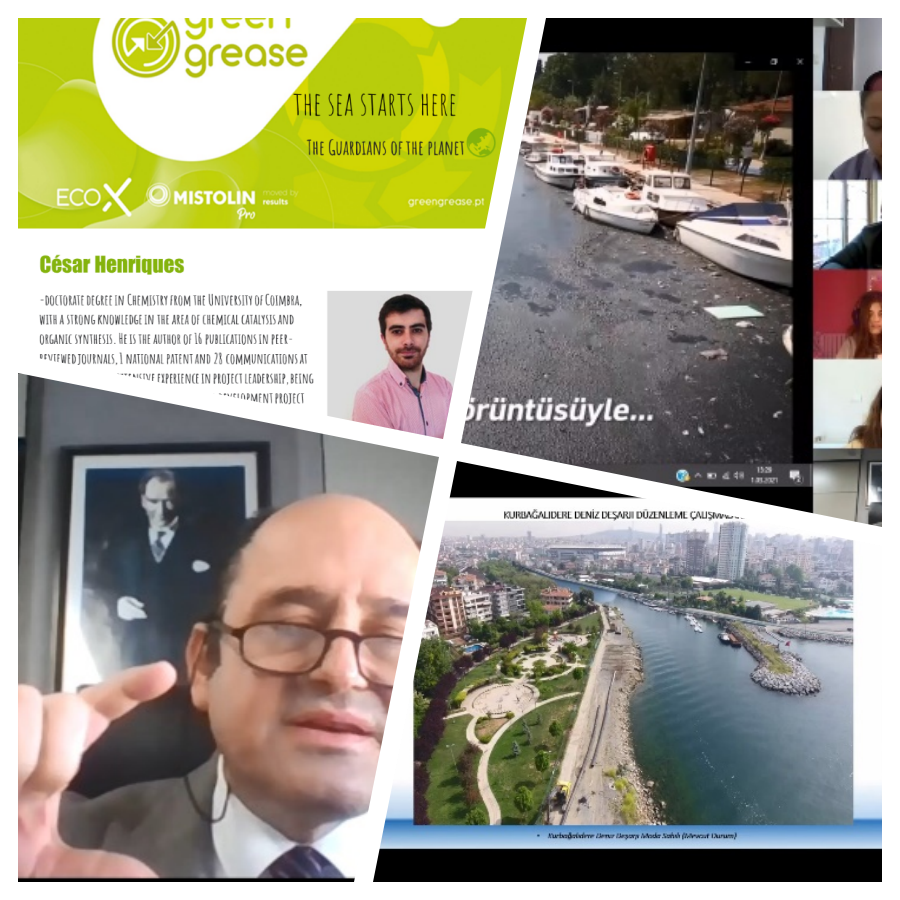 To answer this question, International Exchange, which brings two countries, two schools, about 50 students together within the scope of Young Environmental Reporters came together in an International project with the motto, “The Sea Starts Here”.  Starting from this concern and promoting awareness against pollution, the excessive use of plastics as well as the promotion of good practices, the Agrupamento de Escolas de Ílhavo, Portugal, and the TED Istanbul School, from Turkey, are united in the construction of a common project, involving the dynamism of ABAE’s Eco-Schools and YRE projects in realizing this challenge.

Interview… From oil to detergents

We all know that sea pollution actually starts on land. When oil from the poorly treated sewage mix with sea water, 1 Liter of oil contaminates 1 million liters of water.

Young Reporters from Agrupamento de Escolas de Ílhavo, had an interview with  César Henriques the CEO of EcoX since 2018, the owner of the development project “Recycling of dietary fats through Green Chemistry”.

“I was a researcher before I was in the ecox project. One day I was in the laboratory doing my research in the area of ​​sustainability, I heard a news on the radio about someone who made soaps from olive oil, but how expensive it was. I went looking for an alternative that was a residue that we could value in something different. Oil appeared as a potential raw material. And from then on, I started looking again to investigate the oil recovery part. “ explanined César Henriques, how the idea of recycling oil was sparked.

César Henriques, says many water treatment plants are unable to respond for example on rainy days, or are unable to treat all the oil. This untreated water is returned to rivers and lakes. When it arrives in rivers and lakes, the untreated polluted water will form an upper layer of oil which means that sunlight and oxygen do not enter. The jouvenile  fishes, the fauna and flora, everything ends up dying . It effects the entire food chain.

“We transform this oil into biodegradable products that have no impact when disposed of in the environment. So the impact is much smaller when compared to more chemical and more aggressive products. “Then comes the manufacturing process that when using a waste such as oil as a raw material, we do not need to use virgin raw materials, such as oil, and cut trees, as we do not need other sources for its production.” He expained.

Kadıköy, a region of Istanbul, has been struggling with the pollution problem caused by the Kurbağalıdere stream, which is the longest stream on the Anatolian side of Istanbul. This stream is fed by multiple small streams including districts such as Maltepe, Üsküdar and Kadıköy.

During the online interview with Young Reporters from TED İstanbul Middle school with Mr. Koray Ataç, the Infrastructure Services Manager from İstanbul Metropolitan Municipality, Mr. Ataç gave the good news about the rehabilitation project of the Kurbağalıdere stream that is about to be finalized.

He explained that the Kurbağalıdere stream has caused suffering of the residents of the district for years with its stench, floods, and dirty appearance.  The problems were too many; Wastewater, sewage mixing into the stream and the mud accumulated by them in the stream. Insufficient stream sections that cause floods in cases of rainfall, narrow bends on the stream axis, insufficient water collectors.

The biggest causes of the terrible smell coming from the Kurbağalıdere stream were the sediment accumulated here and the stagnation of water.

Mr. Ataç also added that this has been a very long process: Studies have been carried out for about 15 years, but for the last 1.5 years there has been a great amount of progress.

Two teams, from two different countries concluded that, it is possible to prevent sea pollution if people care and feel responsible enough.