Energy is central to sustainable development. At this point in time, our relationship with it is pretty much symbiotic. It has become instrumental for each and every one of us and, therefore, one of our major global concerns, particularly when talking about energy resources and whether they are sustainable on a long-term scale. Can superconductivity be the answer to our troubles?

Some researches defend superconductivity is an energy-saving technology, whose practical implementation can contribute to the reduction of CO2 and other greenhouse gases emission besides increasing the efficiency (Hawsey, & Morozumi, 2005; Nishijima, 2013)

Discovered in 1911 by Dutch scientist Heike Kamerlingh Onnes, conductivity is a phenomenon that occurs when, below a certain “critical” temperature, some materials shift into the superconducting state, a state in which  materials offer no resistance to the passage of electrical current. In this state, a current can circulate inside the material without dissipating any energy.

The first observation of the phenomenon occurred when Onnes and his team noticed that the electrical resistance of mercury goes to zero below 4.2 K (-269°C). Most chemical elements become superconducting at sufficiently low temperature, depending on their individual critical temperatures. However, this is not everything about this feature. 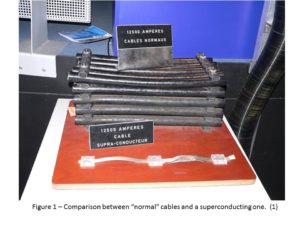 An important characteristic of materials in superconducting states is that external magnetic fields will not penetrate the superconductor, only stay at its surface, if these magnetic fields are weak enough. This was first observed in 1933, by the physicist Walther Meissner –  the Meissner Effect.

It is hard to explain superconductivity by conventional physics. Only years after its discovery, in 1957, three scientists tried to explain it with the “BCS” theory, named after them – John Bardeen, Leon Cooper and John Schrieffer. They established the microscopic theory of superconductivity. According to their theory, the superconducting current can be described as a superfluid of Cooper pairs, pairs of electrons interacting through the exchange of phonons. For this, they won the Nobel Prize in 1972. However, the BCS theory can not explain the existence of “high-temperature” superconductors around 80 K (-193°C) and above.

High-temperature superconductors were only discovered later on, as we can see on the graph (Fig. 2), and they are still being researched. 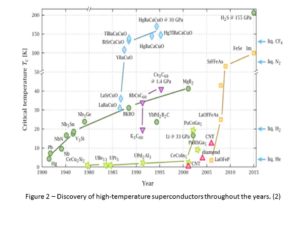 These days, superconductors are already used in many ways.

The Maglev Trains are their most known appliance. They are systems of train transportation that uses two sets of magnets: one set to repel and push the train up off the track as in levitation, hence the name Maglev, from Magnetic-levitation; then another set to move the train ahead at great speed taking advantage of no friction and therefore, having no energy losses due to said friction.

They hold the speed record for trains (603 km/h on a 42.8 km magnetic levitation track) and they travel along a guideway of magnets which control the train’s stability and speed, making them quieter and smoother than conventional trains and giving them the potential for much higher speeds.

These trains can also accelerate and decelerate much faster than usual trains; their only practical limitation is the security and comfort of the passengers. In the picture, we can see the Shanghai MagLev Train, or the Tranrapid, the fastest commercial train currently working. It travels 30 km in 7 minutes and has a reliability greater than 99.97% (Fig. 3). 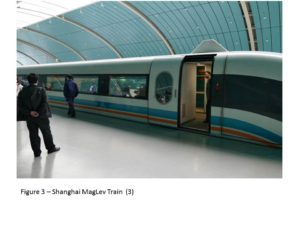 The only factor slowing it down is air resistance, but to fix this, there are even projects for vactrains, a proposed design for very high-speed train transportation, in an attempt to compensate the drag. The reduced air resistance could permit vactrains to travel at very high speeds with relatively little power—up to 6,400–8,000 km/h. However, without major advances in technology are needed, otherwise vactrains would be too expensive.

Besides train gains,  nowadays there are many other successful applications, such as,  high-field magnets for magnetic resonance imaging, laboratory magnetometers for mineral and materials characterization, filters for mobile communications, or magnetoencephalography for understanding the human brain (Hartikainen, Lehtonen,  &   Mikkonen, 2003).

What can the future bring? Can superconductivity be the answer for our dependency on energy and its negative impact on the environment?