Save our Forest, save our lives…

Forests are an essential part of our planet. They maintain the balance of several eco systems. Every year, however, frightening forest fires in California or in Australia become news. And Portugal is not an exception. Forest fires are a constant reality in our country too. Every year, in the peak of summer, thousands of acres of forest are swallowed up by the fire. In June 2017, Portugal suffered one of the most devastating fires ever in its history, known as Pedrógão Grande Wild Fires, where 66 people lost their lives. Are fires inevitable and uncontrolled phenomena?

Fires are an increasingly frequent phenomenon and cause significant changes to the landscape with environmental, social and economic consequences.

Severe climate changes, resulting in increasingly hot summers,  lack of land-use planning namely regarding non-indigenous eucalyptus ~ a very inflammable tree species and really common in Portugal –  as well as lack of cleaning and surveillance of the forest have resulted in environmental and human tragedies.

Another possible reason to justify these events is the population’s lack of knowledge about the laws, how to act to prevent and often the lack of care / civilization to keep the forest clean.

Keeping this in mind, we wondered if we and many other teenagers, as the next generation, are aware of these facts and prepared to avoid the worst.  We, then, decided to make a research regarding the forest, surrounding the village of Caneças and our school by visiting the places, interviewing local authorities and searching for the teens’ opinions. 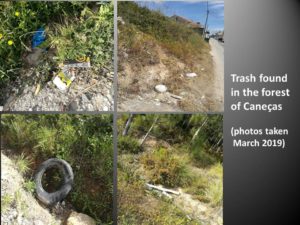 The picture was not very encouraging.

Many bush areas presented lots of abandoned trash, and the bush was a bit dense, which is the ideal fuel to start a fire.

Moreover we could not see either any cleaning work going on or any surveillance.

Our local authorities’ point of view

According to the president of the parish council of Caneças, Manuel Varela, either the present and the future depend on the citizens’ choices “what I think it is important is to call on the people’s common sense” focusing on the young generations’ role:  “it’s up to you, the younger generation has to carry on this task of educating your pairs so that, in the next years, we have a generation that cares more about the public spaces, respecting them.”

He also emphasized that the adolescents must  keep the public spaces clean, saying “…and expecting to make the public spaces our home and not making it our rubbish bin where we throw our wastes, where we let the bushes grow around our houses without any control, thinking we only have rights and not duties”.

One of the great causes of these fires is related to the lack of field and forest cleaning.

The commander of Caneças Fire Brigade claimed that “the cleaning of the forest is not done as much as it should, although there is legislation that compels people to do it”, adding, “…the problem is that this has costs and many owners cannot afford it financially.”

On the other hand, the president Manuel Varela provided a different explanation, ”most of these situations related to forest fires or cleaning habits have to do with civic spirit”.

The legislation mentioned by the commander is the Decree-law 14/2019 pages 443-446. This law compels the owner to clean up the land until March 15th; its  mandatory to create a protection strip of 50 meters around all houses, warehouses, workshops, factories or yards according to the following rules:

Cut the branches of the trees up to 4 meters above the ground and keep them at least 4 meters away from each other (10 meters in the case of pines and eucalyptus);

cut trees and shrubs within 5 meters of the building (excluding fruit trees and protected trees) and prevent branches from projecting over the roof;

Do not accumulate firewood near the house;

This legislation also states that it is mandatory to clean and cut trees 100 meters around villages, campsites, industrial parks, logistics platforms and landfills.

According to the law if you don’t do it by March 15, you may have to pay fines that can reach 10,000 euros for individuals and up to 120,000 euros for companies

Manuel Varela assured that ”green spaces under the responsibility of the parish council are cleaned, and regular maintenance is done” (…), this is our duty and … we do everything according to the law. ”

A survey – Teens’ behaviour and awareness

The question is… Do youngsters care about the forest? Are they aware of the importance of one’s preventing safety behaviour ? Do they know the legislation?

The majority of the inquired (94 students) assumed a correct behaviour regarding keeping respecting the forest not abandoning, throwing trash away.

Yet the percentage decreased when asked about the habit of  cleaning the green area around their houses; 78 students assumed that they and their families had never done it. 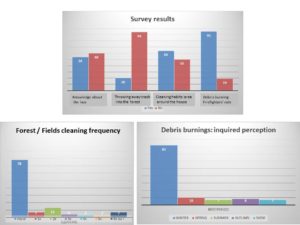 In our survey, we also acknowledged that, among 114 inquires, just around a half  (60 answers) knew the legislation about the Forest and Green Spaces general rules and there was lack of information on when and how to do debris burnings.

Actually , regarding debris burnings , we got a variety of answers. 82 students chose Winter, 7 Summer, 10 Spring, 8 Autumn and 7 claimed that burnings should never be made. .

Carla Silva, forest specialist and City Hall technician, mentioned that actually it’s forbidden to make these fires at the peak height that can change each year and there is legislation and a government platform where these activities must be registered.  Whilst last year the gap where debris burning could not be done was from late May to mid-October, this year it has changed to a shorter gap or can stretch up to November. Either way, “some tragedies have occurred because the people are caught either by the uncontrolled burning or by the smoke. One must never do it alone!”, she added.

According to the Fire Brigade Commander, if you aren’t sure of what you are doing you shouldn’t do it. However if you take that decision, your local firefighters should have that information, but usually people don’t inform them because they don’t know they should or they just think they have it all under control.

Once again, comparing the results of the survey and these words, 95 people said that they knew about this information and only 19 didn’t know. This leads to the second possibility that was given by the the population really does think everything is always under control.

Maybe that is the problem. Perhaps too much confidence is taking us and the forest to misfortunes. The fact is that, we as human beings and citizens have to change our behaviour, look after our lives, homes and, more important, keep a clean and green world to the next generations.

Carla Silva advised the future generations to be aware and allert . She also focused on other rather important issues “the exodus from the rural spaces into the cities made the former often become difficult to manage, and these areas of wild weeds are very important to the fauna. However, when not taken care   they may trigger the spread of wild fires”.

It’s true that sometimes there are fires that are inevitable, at the end they can just be a natural phenomenon, but one thing must stay in everybody’s minds:  we can avoid some situations caused by uncontrolled fires. It depends on the work and the concern of all, whether it is the civil society or the parish councils or the national government.

In our prime minister’s words “cleaning up is an effort that involves the whole society” . It is essential that everyone becomes more aware, more informed  and able to play their role.  Summers will be less tragic and perhaps we will be able to preserve or rebuild a country with clean, green forests.