The year is 2030. The meat industry is thriving and occupying over 80% of the world's agricultural fields. Global warming affects countries worldwide. Plagues spread, and former endangered species can be seen only in pictures. According to the United Nations, famine has become a threatening reality. Cardiovascular and cancer diseases have risen considerably. Does this sound like a gloomy forecast or a futuristic reality? Due to the probability of such scenarios, we have decided to conduct a comprehensive study on one of the factors that has undoubtedly affected both the environment and human health: the increase of red meat consumption. 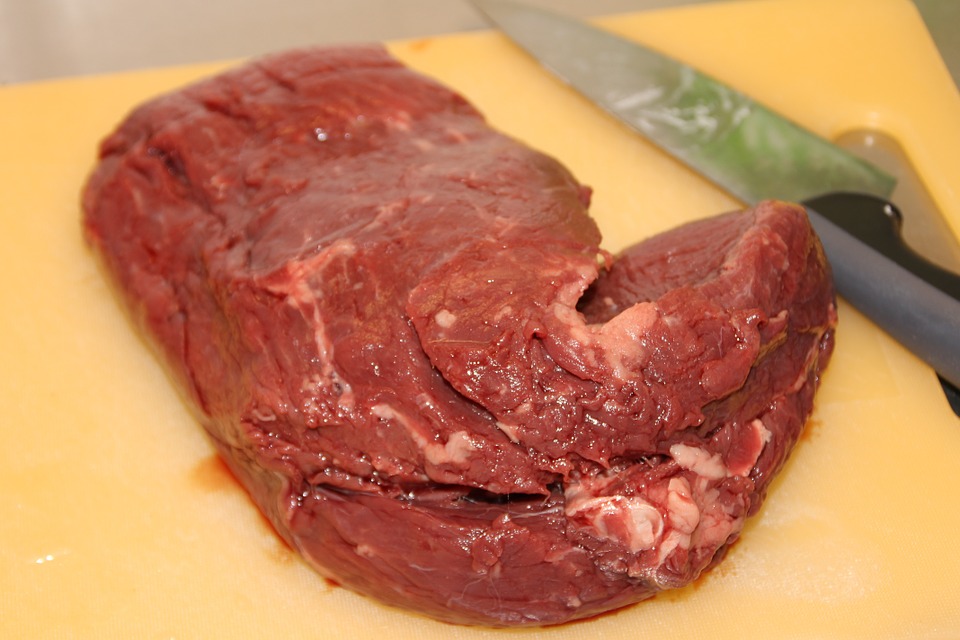 In Industrial countries global meat consumption has increased rapidly in recent decades with harmful consequences either for the environment or public health.

We must ask ourselves whether we can take matters into our own hands, or should we accept it as our fate?

Red meat (beef, pork, lamb, mutton and veal) “contains iron, which we can only consume from meat. There’s also vitamin B12 (…).” dietitian Alexandra Marçal explained “Animal protein has a high biological value (…) it contains all the necessary amino acids, and some vegetable substitutes may not contain all of those.” Yet, she added “an excessive consumption of red meat affects our health cholesterol, because it contains saturated fat  (. . . ), and it may cause other cardiovascular complications.”

Actually, according to FAO (1), in many countries, red and processed meat consumption goes far beyond basic nutritional benefits, becoming a health risk for obesity, diabetes, cardiovascular diseases and stroke.

The way in which red meat is produced, processed and cooked can affect one’s health. Bacterial infections such as salmonella and campylobacter can be transmitted. The presence of these pathogens around farms and slaughterhouses is a modern concern.

“Red meat can affect our health if it isn’t well taken care; if the farmers provide loads of antibiotics (…), but if it’s a trustful meat, in which they don’t use any antibiotics, it won’t cause much harm.” , nutritionist defended

Massive quantity of antibiotics used on livestock has contributed to antibiotic resistance both in animals and in humans, “We absorb them when eating a steak, and they are also excreted by the animals into the ground”, Caneças high school nurse explained.

Red meat and processed meat are also classified by WHO (2) as potentially carcinogenic. “Some studies show that it may also cause cancer, but that depends on how much we eat daily (…). Moreover, eating too much protein (whether animal or vegetable) can cause kidney issues, but (…) only in extreme cases.”

Red meat and the environment

Red meat production is a major contributor to global warming mainly because of the carbon dioxide, methane and nitrous oxide emitted by livestock.

According to the UN’s Intergovernmental Panel on Climate Change (3), agriculture, forestry and other land use accounts for 24% of GHGs, being 60.4% from raising livestock.

“Eating less red meat would reduce our carbon footprint more than if we stopped commuting by car” – says specialist Gidon Eshel, who leaded an important research at Yale on this topic (4).

Furthermore the growing demand for meat or dairy products is putting the Earth’s resources at stake, contributing to biodiversity loss and deforestation as well as having a high impact on water resources.

A study from 2010, by the Water Footprint Network (5) estimated that, while vegetables had a footprint of about 322 litres per kg, chicken came in at 4,325l/kg and beef 15,415l/kg. While it takes 1500 litres of water to grow 1 KG of maize, it takes ten times to produce the same amount of meat.

If the land is used for slaughtering, as the residues caused by this activity remain in the soil, the crops are at stake and water can be highly polluted.  Regarding water pollutants,  the aforementioned antibiotics by our nutritionist pollute the water, since they continue to have an active life even after going through the animal and into the water nutrient (nitrogen and phosphorus from fertilizers and animal excreta); pesticides; pathogens, such as E. coli; metals like selenium and emerging pollutants (hormones and feed additives).

Some alternatives to Red meat

Reducing your intake of red meat can not only improve your overall health and lower your risk of developing diseases but also minimize our negative impact on planet Earth.

Vegetarianism / veganism are presented as alternative. Scientists from Oregon State University, Bard College, and Loma Linda University (6) defended that,  if all Americans substituted beef for beans, the country would be close to meeting the greenhouse gas goals agreed by Barack Obama in 2009 (Paris Agreement).

Some red meat substitutes, according to our specialists are: “White meat and fish (…), eggs and dairy(…), legumes (beans, chick peas, lentils, peas), mushrooms as well, whilst mixing with some carbohydrates such as rice.” Besides that they also recommended “Tofu, seitan and soy”. However, when eating vegetables, “We need to eat larger amounts of vegetable sources of protein than animal ones, due to a lower concentration of amino acids.”, nutritionist  Alexandra warns.

The Mediterranean diet is also defended by many, “Although it does not cut with red meat, it is a plant-based diet, low meat consumption, seasonal products “states nurse Alexandra “ It is a more balanced diet. The Portuguese, unfortunately, have been abandoning it and eat meat and saturated fat more and more.”

The results from a 236 random survey held in Caneças, seem to confirm nurse Alexandra Silva’s assumption, although eating more white than red meat  (the average portion of red meat being 2.65 portions/weekly and white meat being 2.97portions /weekly taking into account all age groups).

We also realized that young adults (between the age of 15-30 years) eat more meat than the other age groups, the average value being 3.59. On the other hand, seniors (65+) eat less meat (average value of 2,22).

According to our nutritionists, despite there being a discrepancy, “It’s not universal, but, on average, the recommended portion- for an average person- would be about 100-120 grams twice a week , but again it varies a lot. For instance, somebody who’s very physically active (…) would need to eat a bigger amount (…). There are also people that don’t need to eat that much (…) for those, eating less than 100 grams is more than adequate.”

All in all, we can conclude that Portuguese people eat much more red meat than it is considered healthy. We acknowledged that few people are vegetarian/vegan people, (just 26 out of 236).Only 26 suggested substitutes to red meat.

In Israel, Dr. Shepon (the founder of the Israeli Forum for sustainable nutrition) recommends many plant-based foods that have high protein content, and therefore offer a nutritious alternative to meat. These include nuts, soy related products and legumes.

Insects have also been seen as a solution for both global food shortages and emissions from animal agriculture. Rich in nutrients such as amino-acids and having potential for mass production – FAO has promoted the benefits of entomophagy – the practice of eating insects.(7)

In Israel, there is a project – The meatless Monday enterprise – aiming to reduce the amount of meat consumption.

In Israel, according to the surveys, among the 60 people inquired, 50% were in favour of this project.  10% are vegetarian, and their food substitutes are mainly legumes. The other 90% eat mostly chicken and beef, most days of the week. Yet 50% do not eat meat at least one day a week.

Environmental concern is not enough to change habits in Israel. 56,6% responded that they would consider changing their consumption habits as a result of the information provided in the survey. So, we came across the idea that education and information can promote the reduction meat consumption in Israel.

In Portugal, despite the inexistence of any projects like “Meatless Monday”, some reflection has been made since October 2015. A Decree-Law proposed by PAN (a Portuguese political party) was passed last June to reduce the consumption of processed red meat at school.

Yet as defended by the interviewed nutritionists, there is no magic single diet. Each individual has unique characteristics and nutritional needs. In order to reduce or stop Meat consumption, other sources of protein and amino-acids must be found. Combining different types of natural sources can be the right solution.

Although it remains difficult to change our consumer habits, government support (by subsidization or by taxation) education and information can be effective.

Creativity can play a relevant role too. Tasty, colourful and alternative dish recipes can help us take the first step!

That is why we have been collecting recipes that can be offered as an alternative to Red Meat.  Tasty Tacos (vegan, grilled fish or soft chicken ones), colourful tuna or salmon Salads and Wraps, French spinach Frittatas or fast but not junk sardine cucumber and tomato Sandwiches are being organized in a joint eco-book to be published on-line from mid to late May (8).

Bearing in mind the negative impact of Red Meat consumption described above, both on the environment and on public health, we must take matters into our own hands, and stop accepting it as our fate.