Contradicting what some people still think, plastic is not only devastating marine ecosystems but also ending in our plates. More and more plastic is floating in our oceans and seas. Coming from trash irresponsibly thrown away, from discarded fishnets, from brushing our teeth or from washing synthetic clothing, tons of plastic wastes have been forming huge toxic plastic soup gyres threatening both marine and human life. The students from Caneças High School have been both debating this hot topic in class and initiating a awareness campaign.

Microplastic & plastic pollution is threatening marine life as we know it and humans as well. Data available estimates that, at least, 100 to 150 million tons of plastic waste are floating in our seas and oceans. Estimates suggest that per year approximately 8 million tons of plastic waste is added to the plastic soup.  Most of the pollution by far comes from land. At least 80% of the plastic rubbish in the sea is dumped by industry and by people on land and is carried to sea by rivers canals, harbors and the wind. On top of this shipping, fisheries and the off-shore industry are important to the pollution, though compared to the land sources, this is “only” 20%.

Plastic does not disintegrate into organic substances. Gigantic Plastic Soups have been formed and are becoming toxic, because of the sun and waves plastics are shattered into smaller pieces, and when this happens it releases toxic substances that end up entering our ecosystem through our food. The problem in this is that the oceans are our primary oxygen and food suppliers but because of the plastic soups, plastic is not biodegradable, many marine life dies and one day we might even lose all the marine life. We are drowning in plastic and we need to do something about it.

On the other hand plastic simply breaks down into smaller and smaller pieces of plastic. These tiny plastic particles can become are as small as the algae and plankton, the basis of many marine species food. They have a suggestive smell to fishes, created by their “chemical signature” as a recent study made by Matthew Savoca, ChrisTyson, Michael McGill and ChristinaJ. Slager has shown, “Recent evidence suggests that the chemical signature of plastic debris may explain why certain species are predisposed to mistaking plastic for food”. When a micro plastic that got to the size of plankton, is eaten by a small fish it makes it feel “fully fed” and it accumulates in its digestive system without giving him any nutrition, this obviously ends up killing it.

Species such as shrimp, birds, and fish consume these micro-plastics. The plastic chemicals can then be absorbed by predators of these species and this ends up affecting all the food chain. If a fish that has consumed micro plastic is eaten by a bigger one, the big fish is affected too due to the microplastics he indirectly ingested. These fish end up in our plates. So this makes us a micro plastics consumer. Fish are not the only ones that consume microplastics, a big amount of other sea creatures are also consuming micro plastics, shellfish, which can filter microbes and microplastics.

How does plastic get into the ocean?

According to the Dutch Ocean Cleanup Foundation, “Rivers are a major source of plastic waste into the oceans. We estimate that between 1.15 and 2.41 million metric tons of plastic currently enters the ocean every year via rivers.”

There are other ways wastes get into our oceans:  ghost nets abandoned by fishermen, entangling and getting eaten by animals; clothing fibers – According to a study by the International Union for Conservation of Nature “plastic particles washed of products such as synthetic clothes contribute to 35% of the plastic polluting our oceans.”. When we wash our clothes they loose fibers that the Wastewater Treatment plants cannot filter, so they directly head into the ocean. Cosmetics are also another ocean plastic polluter. Several are made with microplastic ingredients that are released when we wash our face or have a shower. These microbeads cannot be filtered by the water treatment stations, due to their small size, so they basically head directly into our ocean.

So a question must be asked So… What can we do?

Madhuri Prahakar, from Plastic Soup Foundation, suggests “Focus on not letting it get into the ocean”.

There are multiple ways we can do this. One of them is by practicing a plastic diet a plan that reduces the amount of plastic we use in our daily routines. The Plastic Soup Foundation gives simple tips: “Avoid synthetic materials (Polyester, nylon, acrylic, polyamide, spandex, rayon…), these are all synthetic fabrics and when washed, they break into smaller pieces, smaller than 5mm. Avoid them as much as you can and look for wool, cotton, linen, silk or other natural fabrics. That goes for clothes or any other textile that you purchase for your house. (…)  Just use wooden chopping boards. They are much better for your kitchen, both in terms of quality and aesthetics. You don’t need to use the thin plastic boards which can be easily scratched and sliced with your knives, this way, you don’t have the risk of tiny plastic shavings get into your food!”.

Accoding to Caneças high school Eco-Schools coordinators, “Informing the population of the facts and their impact is essential. Not just awareness campaigns… but cleaning campaigns, to make students and their families get involved! We joined the Coastwatch project to start.

It is a 2-year project. It involves students’ research projects and contact with national and international foundations like the Portuguese Skeleton Sea and the Dutch Plastic Soup Foundation, organizing cleaning campaigns and using Art to grab people’s attention.

“Skeleton sea” was created to use plastics and trash, they collect in beach cleanings, instead of throwing them way. Till this day they have been recognized and some art pieces are world famous. Some examples of their art are “Tiger Shark”, “Polvo incognito” “Lulu fish”, and “Miss flip-flop”.

As Eliana Jesus (an Art 12th grader student) told us “Art is a good way to spread the message due to the fact that it is visual and can grab people’s attention more easily . It must be used to make people aware of important issues like Plastic impact in our lives.”

My piece “Explosion” uses part of a human body (humanity) vomiting plastic. We are suffocating in plastic wastes and we need to “vomit” it from our lives. We are more and more dependent on plastic, a material that is harmful for marine species and at a long term for us” , Eliana explained 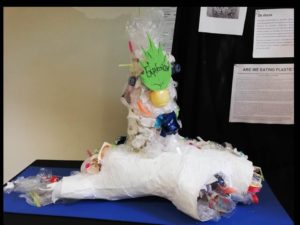 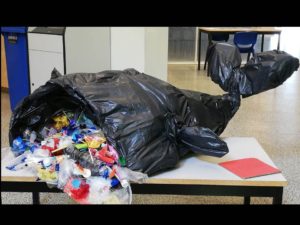 “The exhibition will be open to the Community in September at Casa da Cultura in the center of Caneças village and that will be the beginning of phase-2 of the project. This is a very serious problem, a research states that in 2050 there is going to be more plastic in the ocean than fish. Action is needed.” Eco-schools coordinators said.