On the road with deputy Hugo Costa

Hugo Costa, a deputy (PS) from the Portuguese government give a lecture about environment and the policy in which our country leads environmental issues. 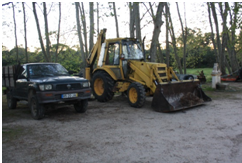 Hugo Costa, is a deputy from the Portuguese government and the current coordinator of the Parliamentary Commission of Inquiry into the Payment of Excessive Income to Producers of Electricity.

He believes that Portugal is the most capable country for producing aeolic energy. On the other hand, he refers that solar energy produced in the coast is not profitable due to the limited space and the short hours of daylight that doesn’t make it profitable.

Hugo Costa also compared the state of mobility in the big cities with the state of production of energy in the rest of the country. Nowadays it is a fact that the consume of oil in the cars is way bigger than it should be, so scientists are seeking for alternative and environmental sources of energy to feed our vehicles.

In other aspects  the production of energy in the whole country is based on environmentally friendly capability of achieving the best production coming from renewable sources of energy.  For example the windmills all across the country have a very important role to national feed, such as solar panels in the hottest and sunniest regions of the country (as Amareleja for example ), and of course the existence of energy that dams produce on a daily basis.

To sum up deputy Hugo Costa expressed the need to find other ways to fuel our cars, or in last case to use alternatives ways to shrink the time and the waste of oil production nowadays, even if our ability for producing energy is very high compared to other countries in Europe.