The energy crisis we face affects our society at very different levels from the environmental up to the economical one. Among the many solutions to address this problem, the construction of sustainable houses improving energy consumption should be even more debated and protected by tax incentives.

A shelter is one of the key instruments for mankind’s survival. We have, however, come from using nature to seek protection in caves to abusing earth and building indiscriminately disrespecting our home – Earth. Cities and suburbs have been spreading often without rational control or management. .

In 2008, for the first time in history, urban population outnumbered rural population. To run their activities, cities require an uninterrupted supply of energy. They consume about 75 per cent of global primary energy and emit between 50 and 60 per cent of the world’s total greenhouse gases. (UN-HABITAT Global Activity Report, 2015)

On the other hand, cities have been suffering the consequences of civilization development: “the concrete and black tar dictatorship”. Actually, an aerial view of most of our cities shows mainly crowded streets, black tar, tiny people as well as dark gravel-ballasted rooftops. In a word, darkness and very few green spots!

Yet, there is a new trend that breaks up the monotony of common buildings facades and roofs: green rooftops and facades. 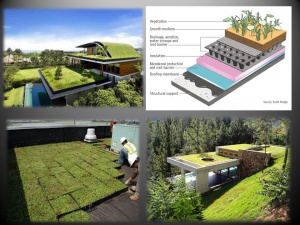 A green roof is made in layers and requires installation of a specific structure on the roof. Closer to the base, the waterproof membrane aims to prevent rainwater from entering the roof and cause leaks or spills. Just above, the layer that will store part of the rainwater will be used by the plants themselves as a reserve. Above is the earth layer which can vary in thickness. Finally, comes the layer plants – and the species may be different for each region.

In fact, these roofs are a good method to increase energy efficiency and reduce energy costs. “We have (energy) savings between 20/25% and 75%”, engineer Paulo Palha defends. “(the green roofs) are systems that will keep the warm in the winter and the cool in the summer” and so it will not be as necessary as it is now to have an air conditioner or a heater at home. Another profit is the low maintenance costs of buildings, thanks to the plants’ absorption capability, making it less necessary to have a good drainage system”. 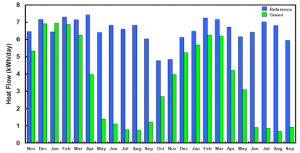 Furthermore these green roofs give a new look to a city and have an important role in the comfort of the houses as well. They increase the protection against noise. They can also be a garden and if so, it can increase a person’s mood. By creating more green spaces, the differences from the countryside are blurred, losing its dark side and gaining a new life making it more enjoyable to live in a big city.

According to architect Luis Silva, responsible for Urban Planning Department of Civil Engineering Company of the Greater Lisbon area, “Green roofs can be used to reduce heating, allow the creation of a natural habitat, contribute to the filtration of pollutants and carbon dioxide and help insulate the acoustics of a building.”

A green coverage can heat up to 60 ° C while the common grass reaches only to 25 ° C, the difference can be reflected  in the decrease of air conditioning usage, the energy bill (cost reduction from 20 to 30%) and ecological footprint.

The typical roofs are constituted by concrete and asphalt. These two materials irradiate the solar energy in the form of heat and, as the heat is propagated by the surroundings, the house temperature increases. In contrast, green roofs provide the temperature maintenance because its vegetation will use 80% of the energy it absorbs in the evapo-transpiration (2% in the photosynthesis, 48% is transmitted by the leafs and 30% is transformed in heat, used in the transpiration). This prevents the using of air conditioning or heaters that are malignant for the environment, plus for your wallet. The Green roofs vegetation cover dissipates or consumes that energy by evapotranspiration and by photosynthesis, reducing the heat transferred to the interior.

Despite the present disadvantage of their high costs, due to the materials involved and, sometimes, the complexity of installation and/or the existence of skilled labor,  architects Luís Silva and  Thiago Moretti, of Isay Weinfeld Workshop,  they both defend that ” The initial cost may bring aestetic, economic benefits, aesthetics and environmental advantages”.

The implementation of gardens on the roofs of buildings is already relatively popular in the United States, the Scandinavian countries and Germany. Is taking gradually the rest of Europe and Latin America. In Portugal, examples like the new WasteWater Treatment Plant WWTP of Alcantara, The Gulbenkian or the Garden of Olives at the Belem Cultural Centre are already successful projects.

More recently the “Natura Towers” were built in Lisbon. These two service buildings have photovoltaic panels and green facades that produce oxygen and absorb carbon dioxide, that’s why they are “totally green”. These towers have a range of 35 m tall grass with integral irrigation and panels about 160 species of plants and flowers and they still have a rainwater storage system for irrigation. The shopping center “Dolce Vita Tejo” also has a green facade, composed of several plants adapted to local conditions in its central square. 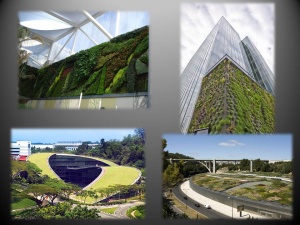 The Faculty of Science, University of Lisbon (FCUL) aims to develop an experimental study, installing an extensive coverage (150 square meters) of green roofs. This project, considered emblematic by its promoters, shows that the Portuguese Universities are willing to contribute to greater sustainability with the development of research projects.

For architectural , energetic, environmental and aesthetic reasons, putting a lawn or a garden on top of housing or covering a facade starts to make sense in our country! And… wouldn’t you feel better to watch green instead of the usual grey?