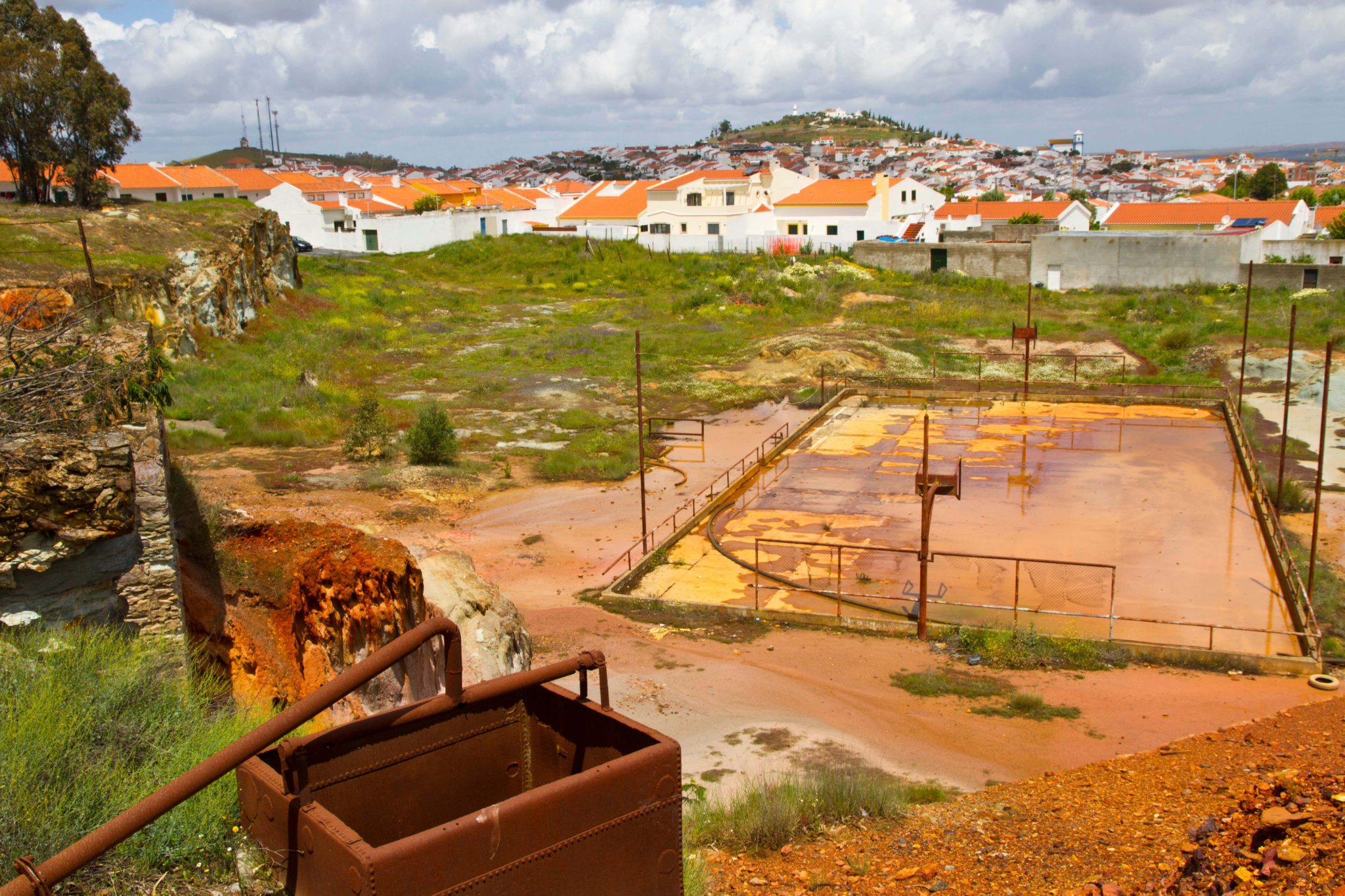 “The mines are wonderful” This is how one of Aljustrel’s inhabitants describes the importance of pyrite mines for Alustrel’s municipality. However, throughout the last decades, abandoned mining sites are contaminating the soils and underground water courses. This phenomenon is called acid drainage and it happens when minerals that were deep underground are exposed to oxygen and water, creating acid compounds. Modern mining activities are licensed, but many problems still need to be corrected so as to achieve sustainability.

Aljustrel is located in the Iberian Pyrite Strip, worldly renowned for its pyrite wealth. These have had and still have a positive contribute for the area’s socioeconomic growth. As Manuel Valente, a former miner, said, “The mines are wonderful for our municipality”.

However, despite their importance, there are downsides. The pyrite extraction in the region has been having some impact on the environment surrounding the mines, as pyrite is the cause of a phenomenon known as mining acid drainage (MAD). This happens when minerals containing sulphides, deposited deep underground, are exposed to open environments and react with oxygen and water, creating sulphides (acid compounds), which may contaminate underground water and nearby water courses.

This issue led a group of students from Colégio Valsassina to develop a study, from November 2011 to March 2013, on the environmental impact of MAD in a 1km long stretch of the Ribeira de Águas Fortes, in Herdade Monte Ruas, near Aljustrel.

The results are cause for concern. The pH values are close to 2.5 (also registered by Oliveira, 2003, Luís, 2007 and Gonçalves, 2008 in Mateus, 2008;). No macroinvertebrate pollution bioindicators were found, which suggests a high level of contamination. The chemical analysis of superficial water samples revealed the presence of high levels of heavy metals, originating from the pyrite deposits.

In Aljustrel’s municipality, you can find an enormous heritage of classical and industrial architecture, with great historical value.

Those who visit Aljustrel will find a unique heritage related to deactivated mining facilities, the testimony of mining activities going back to the nineteenth century. Similarly, the results of mineral extraction throughout the past decades are reflected in areas riddled with waste dumps of chemically active material, potentially contaminated soils and acid water dams. 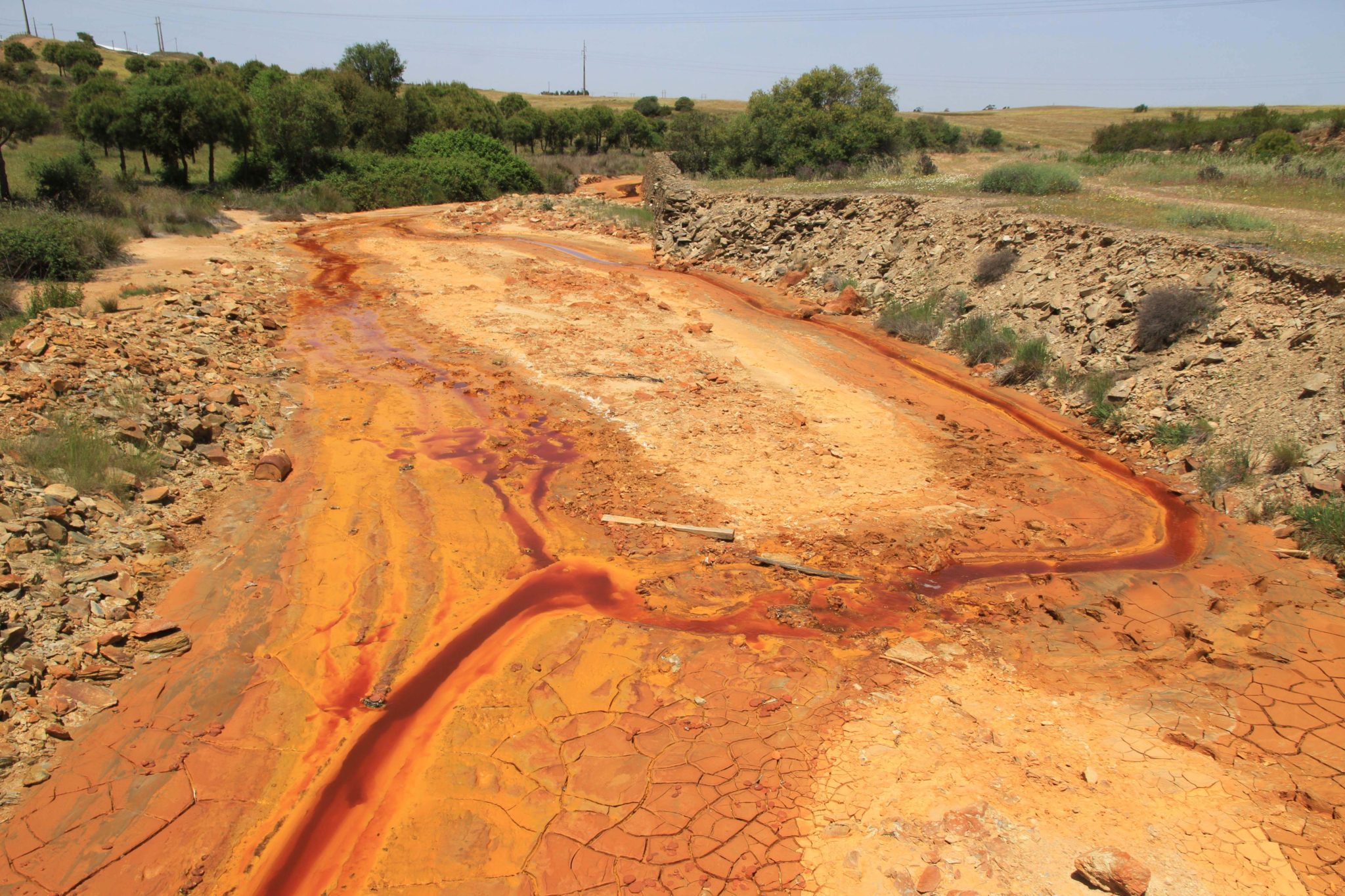 Partial sight of a strectch of the Ribeira de Águas Fortes, where MAD damage is evidente. The elevated amounts of iron which, despite being insoluble remains inside the sollution with high concentraion in colloidal form, give the water its dark red colour. 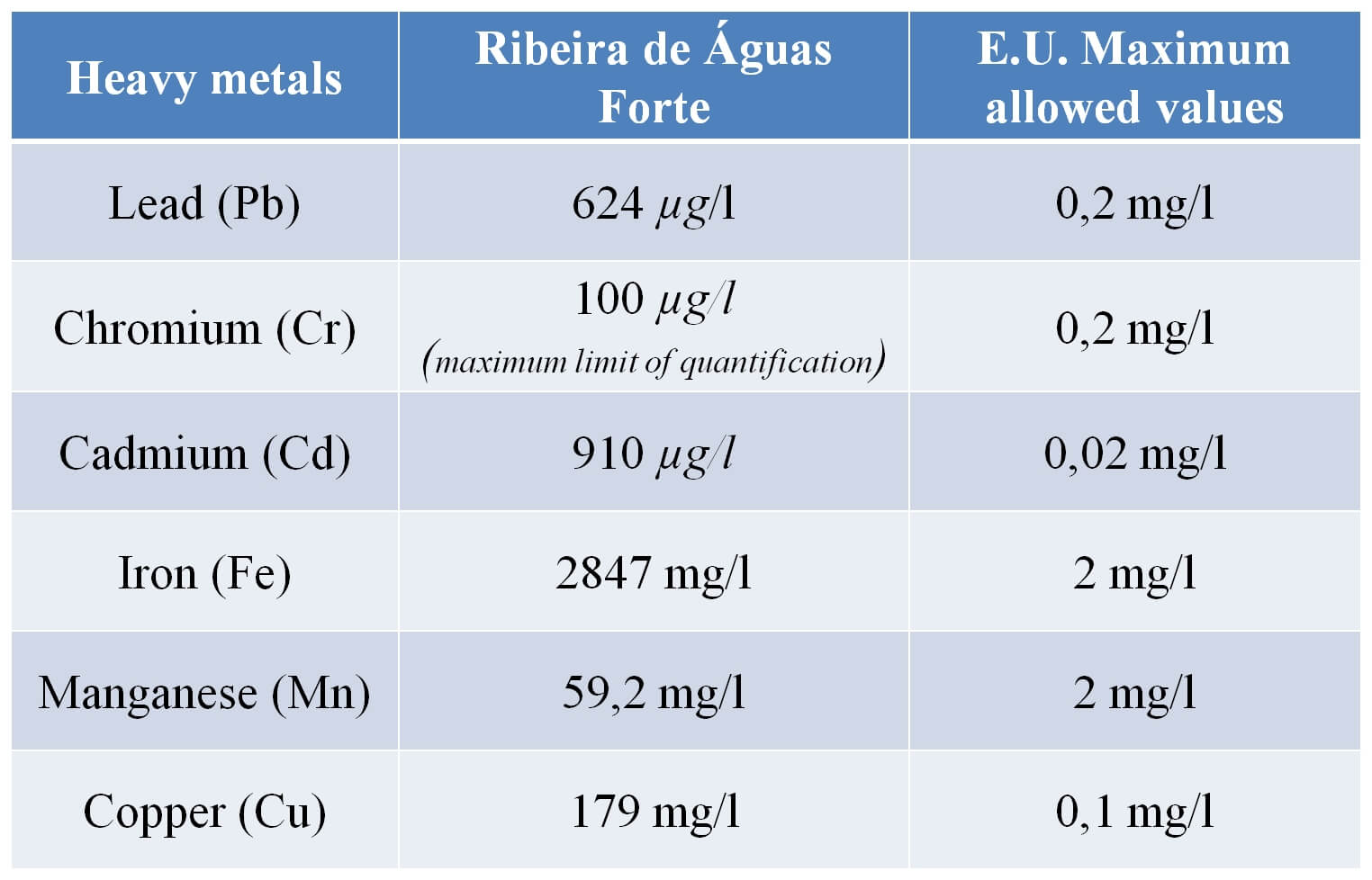 Results of the chemical analysis of the concentration of heavy metals in superficial water samples from Ribeira de Águas Fortes and comparison to E.U. Maximum allowed values. In general, Cu, Fe, Mn, Pb and sulfates are often found in high concentration in acidified water and their solubility increases with acidity.

Therefore, there is an urgent need for acting quickly on this issue, which may be controlled through preventive and corrective techniques, both inside the mining complex and around the affected areas.

From what was found, most detected problems are in abandoned mining areas, whose environmental recovery is up to the Portuguese State, more specifically, of the Empresa de Desenvolviemnto Mineiro. However, the evidence left by abandoned mining compounds is clear, in what can be described as a long lingering problem.

Nowadays, the mine’s economic balance is dependent on the extraction of zinc and copper, whose concession belongs to Almina- Minas do Alentejo. Arménio Pacheco, an administrator in this corporation, states that all activities are under an environmental permit, on waste management, superficial and underground water control, effluent dump, noise and atmospheric pollution.

The great growth of mining extraction in Portugal is opposed to this country’s economic situation.

Gisela Ramos, Aljustrel’s inhabitant, states that “the mines are the life of Alentejo” and are undoubtedly one of the region biggest employers, contributing to the growth of regional and national economy.

The social and economic importance of these mines makes the solving of environment issues, present in Aljustrel, urgent. Only this way sustainable development can be achieved.

We thank Gisela Ramos’ and Manuel Valentes collaboration. Without their assistance this article could not have been written.